For people who use binoculars, you must have come through the phrase “Extra Low Dispersion ED Glass” mostly known as ED glass. If you have never understood what it means, today is your luck. I am going to give you every important detail on what you should know about an ED glass in regard to your binoculars.

Extra-low-dispersion glass is widely used in the best optics applications and more so in areas where accuracy and also the clarity of vision plays a key role. Due to its capacity and importance in optic applications, ED glass is usually used on binoculars, high-end camera lenses, scopes, and rangefinders among many other devices that should provide high-end image quality.

How Optics Work? What is dispersion and aberration?

When light travels through glass or lens its phase velocity changes and breaks into its component colors. A good example that will make this concept simpler is the prism concept. When a light ray hits on a prism, it splits into different colors. These many color waves are usually produced depending on their particular frequencies.

This type of separation of light waves as they pass through an optical glass is what we refer to as dispersion or chromatic aberration (CA). 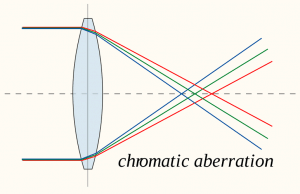 Another type of dispersion is called spherical aberration (SA). It is the result of lens curvature, not the result of prism effect. When light travels from a distant object through the lens, it can’t accurately be focused toward the focal point or retina. As a result, the observer sees blurry halos around the image.

Why the Extra-low-dispersion (ED) Glass?

The reason why we need an ED glass when it comes to optics has everything to do with chromatic and spherical aberration. When viewing through normal optics, chromatic aberration produces an image with rainbow effects, or the subject being viewed has a noticeable colored edge -blue, purple, even yellow. This chromatic aberration is most obvious when viewing high contrast objects. 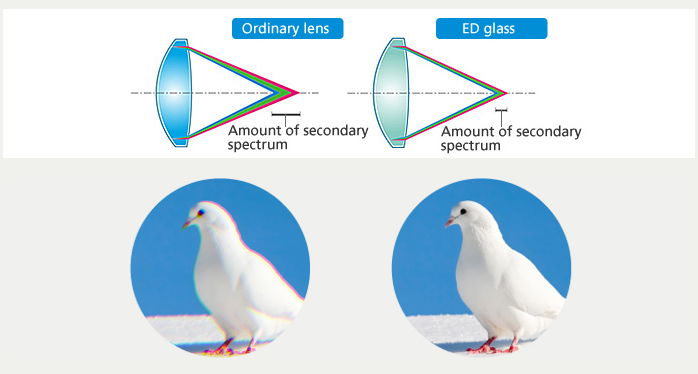 Now, this is where an ED glass steps in to help and minimize any distortion caused by chromatic or spherical aberration. ED glass has been improving with the latest technology that minimizes those image distortion. ED glass is sometimes referred to as HD glass. You may hear some manufacturers use the term fluorite as well. Basically, binoculars or other scopes that have ED, HD or fluorite glass have one or two extra glass element in there to minimize these chromatic aberrations.

How Is Extra-Low Dispersion (ED) Glass Made?

Traditionally ED glasses were made by merging two main glass elements (crown glass and flint glass) into one unit called an achromatic doublet. The reason two glass elements were merged was to enable them to cancel out in case one element had higher dispersion characteristics than the other. In some cases, manufacturers would coat lenses with any other substances that were designed to produce much more similar effects. This type of ED glass made from achromatic doublet was a big step forward in reducing chromatic aberration and hence producing sharper image quality. 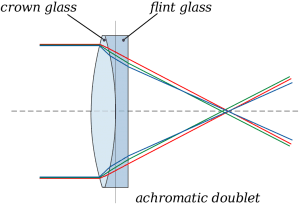 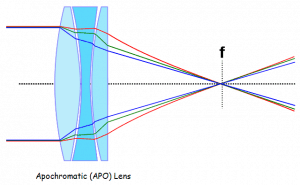 Apochromatic lens (APO) is made with three glass elements combining together.

Traditionally ED glasses were produced by mixing fluorite based minerals. However, fluorite based ED glasses tend to fracture upon exposure to temperature fluctuation, if not manufactured to exacting standards. Even today the use of fluorite based minerals in ED glass is widespread. Nikon is considered a pioneer of the ED glass of modern day. Canon also uses similar technology to make its premium calcium fluorite ED/HD lenses. Today zirconium dioxide, calcium fluoride, titanium dioxide, and other rare-earth elements are used to make these ED or HD glasses. The result of this high-end technology has minimized CA and SA to greater heights and given out sharper and brighter images for high-end optical gadgets too. 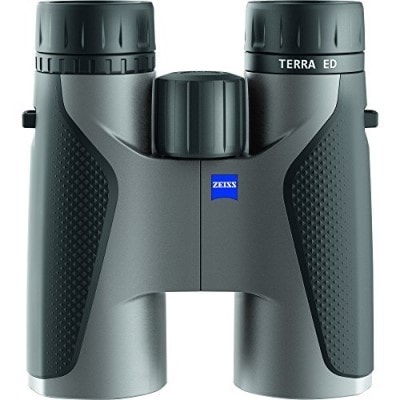 When you look through a pair of normal binoculars at long distance, say a deer or something with antlers on it, you may see that color fringing. In that case, it’s hard to pick out the details of that antler or the spots on that deer. ED or HD glass binoculars give you that fine detail and sharpness when you look through the binoculars. ED glass binoculars are especially important if you go for long-range viewing especially out west. If it’s closer ranges the Midwest eastern United States where you only view a hundred yards or so then it’s not quite as critical to have that but Western hunting definitely.

ED glass is also much more efficient in terms of light transmission, which enables it for quicker focusing adjustment and brighter images in your viewfinder.

Since ED glass is designed to minimize the characteristics of CA inside optics devices it has to be very viable. One quality that guarantees an ED glass is its high resistant to temperature changes which adversely affected the capacity of previous lens variations in minimizing CA. Clearing the effects of CA in optic devices requires solutions that are based on finding the best types of glasses, lenses, and coatings that are pretty suitable in producing the right dispersion effects.

Modern glass fabrication techniques have taken huge strides into this. They employ materials that have been tested for precise quality and use computer control to even maintain furnace temperatures and enjoy consistent flows during cooling with the exact substrate mixing that gives a much more consistent result.

About the Author: Scott Jones

Hi, my name is Scott Jones. I’m a biologist from Maryland. I have an MSc in Systematic Biology and Ecology. I love to spend time in nature, watching birds and their habitats, and traveling to different continents to study wildlife.From my childhood, I would love to play with different optical scopes. I had a good collection of magnifying glasses and a cool pair of Russian made binoculars when I was in the 5th grade. With time I started to gradually build up more interest in binoculars. Then I collected several pairs of binoculars to quest my deep interest in optical scopes.Over time I learned how to determine the best binoculars pair. Then I decided to share what I knew with the world. Ever since I have borrowed a number of pairs and made some of the best reviews. I have developed blogs to share my knowledge and that’s how I got here.I am occasionally asked by binoculars suppliers to review their models. If you are willing to have reviews of your products under certain conditions please feel free to contact me at scotjones23 @ gmail.com 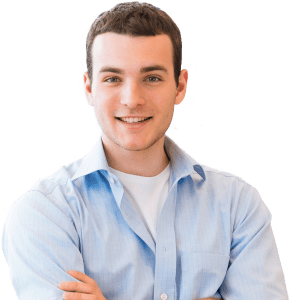 I was only 12 when I first received my first pair of binoculars from my Dad. It was a cool pair of Russian made binoculars that I played with. With time I started to gradually build up more interest on binoculars. Then I bought a few pairs for my research, nature trail walk, and path finding…

Overtime I learnt how to determine the best. Then I decided to share what I knew with the world. Ever since I have borrowed a number of pairs and compiled some of the best reviews. I have developed blogs to share my knowledge and that’s how I got here.